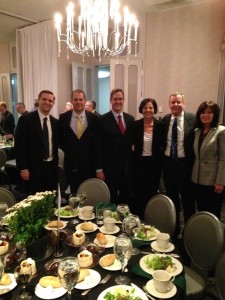 Bruce Rinker, a member of Mansour Gavin LPA’s Real Estate and Land Use practice group, was recently honored at the Cuyahoga County Mayors and City Managers Association’s annual dinner.  Held at Landerhaven, the event toasted – and gently roasted – outgoing mayors and city managers from the area. Other departing mayors honored included Richard Balbier of Brooklyn, Tom Brick of Chagrin Falls, Bill Cervenik of Euclid, Greg Kurtz of Independence, and Joe Cicero of Lyndhurst. Rinker, who is not seeking re-election after 22 years as the mayor of Mayfield Village, will step down from his post in January 2016 when his successor is sworn in.

While circumstance led him to run, as a vacancy opened up in the mayor’s office while he was City Council President, Rinker says he developed a sense of commitment to putting the village on a path toward long-term stability. He is most proud of growing a healthy tax base, rebuilding and refurbishing all major public facilities and amenities in the village, and installing a new and greener infrastructure during his years as mayor. “Our creation of the Greenway, the spine of our greenway corridor, is emblematic of our seamless meshing of residential, commercial and recreational uses within our boundaries,” Rinker said.

And what will Rinker, who also serves as a Cleveland Metroparks Commissioner, do with a bit of extra free time once his tenure as mayor is complete?  “What’s that?” he joked.

Congratulations, Bruce! Mansour Gavin sincerely appreciates your years of public service, and all that you have contributed, both to your community and to Cleveland.

Mansour Gavin LPA has been awarded a 2022 Top Workplaces honor by cleveland.com and The Plain Dealer Top Workplaces. The list is based solely on employee feedback gathered through a third-party survey administered by employee engagement technology partner Energage, LLC. The anonymous survey uniquely measures 15 culture drivers that are critical to the success of [… read more]

Tatyana Pishnyak is taking part in a free legal clinic and resource fair for Ukrainians affected by war on June 24th from 9am-2pm at the Church of Evangelic Faith in Parma, OH. Consultations and legal advice will be provided for free for a range of legal issues such as immigration, real estate, employment, discrimination, etc. [… read more]