All of our lawyers strive to be results oriented when it comes to resolving a client’s legal problem or helping them to achieve personal or professional success. 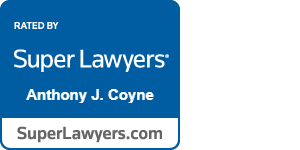 Anthony Coyne is President and Managing Partner of Mansour Gavin, and his practice is focused on business law, municipal law, zoning and planning, eminent domain, real property, and litigation.

An expert on urban affairs, he has authored several papers, served as Executive Assistant to the Director of Transition for Cleveland Mayor Michael R. White and was a Judicial Extern for Judge Alice M. Batchelder, who currently serves on the U.S. Sixth Circuit Court of Appeals.

He is licensed to practice in the State of Ohio and has been admitted to the Supreme Court of Ohio, the U.S. Supreme Court, the U.S. Court of Appeals for the Sixth Circuit, and the U.S. District Court, Northern District of Ohio. His notable cases include:

He is a frequent guest lecturer and has spoken before organizations such as the National Business Institute, Lorman Educations Series, the Cleveland and Ohio State Bar Associations, Ohio Planning Conference, CLE International Seminar on Eminent Domain, Urban Land Institute, and International Council of Shopping Centers on topics such as eminent domain, zoning and land use, and municipal law.

Active in the community, Mr. Coyne served on the Planning Commission for the City of Cleveland from 1990-2015 and was its Chairman for 15 years. In addition, he was appointed by Mayor Frank Jackson to serve as Chairman of the Group Plan Commission of the City of Cleveland, where he currently serves as a board member. During his tenure as chairman, the Group Plan Commission developed a several million dollar public spaces improvement and usage plan for downtown Cleveland that led to a $50 million renovation of Public Square, enhancement to the downtown MALL as well as the fundraising and the initial design for a pedestrian bridge that will connect the MALL to the lakefront. Public Square re-opened to the community on June 30, 2016, receiving national acclaim for design, use, and programming.

Tony enjoys spending time with his wife Rachelle and family. He is an outdoor enthusiast who enjoys golf, bicycling and jogging, as well as all the cultural and artistic opportunities Cleveland has to offer. The family lives in Ohio City.